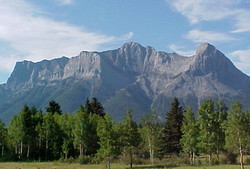 Mount Lawrence Grassi forms the backdrop to the Town of Canmore. It features two named peaks, Ship's Prow on the southeastern end and Ha Ling Peak on the northwestern end. The high point between these two is the summit of Mount Lawrence Grassi. Lawrence Grassi (1890-1980) was a remarkable individual who emigrated from Italy in 1912 and based most the rest of his life below the Three Sisters in the Town of Canmore. After spending four years as a section hand with the CPR near Kicking Horse Pass he began working in the Canmore coal mines and soon had an impressive record, not only as a coal miner but also as a climbing guide. Grassi visited all areas of the Rockies, making many solo climbs, some of them undoubtedly first ascents that were never recorded. He didn't look the role of the classic alpine guide, wearing suspenders and old mining boots with hobnails and sometimes even rubber boots. Although he climbed many of the high mountains in the Rockies his favourite was probably the technically demanding Mount Louis, which he climbed thirty-two times. In the summer of 1925 he is said to have completed the first solo ascent of Mount Assiniboine and in 1926, together with another climber, ascended the east face of Cascade Mountain, above the waterfall. Although small in stature, his strength was legendary. In 1926, Dr. R.D. Williams of Calgary broke his leg while climbing Bastion Peak in the Tonquin Valley southwest of Jasper. Rather than leave the man on the mountain while he went for help, Lawrence carried the much heavier man on his back for two miles down a steep mountain, across a glacier and over moraine to a waiting rescue party. Although he loved to climb he also loved to build trails in the mountains. An examination of the trails Grassi built, not only in the Canmore area but in other valleys of the Rockies as well, demonstrate his strength as well. Huge stones were moved single-handedly to construct steps, bridges, or simply provide stepping stones. After he retired from the mines, Grassi spent several summers in the Lake O'Hara area where he worked as a park warden. His beautiful rockwork there will be used by generations of hikers to reach the high valleys of Lake Oesa and Lake McArthur. Grassi's love of the mountains is legendary. It is said that he once headed off to Calgary for an eye examination but failed to arrive. Lawrence explained that when he got as far as Ghost Dam he looked back and, because the mountains looked so far away, he couldn't go any farther and had to return. In a speech to the House of Commons supporting the naming of two lakes after Lawrence Grassi, Dr. J.S. Woodsworth said, "Last summer I spent a month in a little mountain town in the Rockies. For me, the most interesting individual in the community was Lawrence Grassi, an Italian miner. In the course of a prolonged strike, instead of loafing about the village, he set off into the hills, axe on shoulder, to make trails to points of interest. It was a labour of love. He loved the mountains but enjoyed having others share their beauty. So day by day he pushed through the bush discovering the best ways of approach -blazing a trail, cutting out the underbrush, grubbing out stones and rocks, bridging little mountain streams..." Dr. Woodsworth went on to say, "The world needs Grassis... men who will seek new paths; make the rough places smooth; bridge the chasms that now prevent human progress; point the way to higher levels and loftier achievements." The Grassi Lakes lie above Canmore, beyond the Rundle Reservoir. A walk along the trail that Lawrence Grassi built to these two gems will provide some insight into this most reknown of Canmore's citizens. For a panoramic view from the summit of Mount Lawrence Grassi visit www.canadasmountains.com. [Additional information: "Tommy and Lawrence -The Ways and Trails of Lake O'Hara" by Jon Whyte]

Looking northwest to Mount Lawrence Grassi from the Trans-Canada Highway