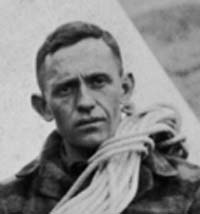 Lawrence Grassi was a remarkable individual who emigrated from Italy in 1912 and based most the rest of his life below The Three Sisters in the Town of Canmore. After spending four years as a section hand with the CPR near Kicking Horse Pass he began working in the Canmore coal mines and soon had an impressive record, not only as a coal miner but also as a climbing guide.

Grassi visited all areas of the Rockies, making many solo climbs, some of them undoubtedly first ascents that were never recorded. He didn't look the role of the classic alpine guide, wearing suspenders and old mining boots with hobnails and sometimes even rubber boots. Although he climbed many of the high mountains in the Rockies his favourite was probably the technically demanding Mount LouisMount AssiniboineCascade MountainBastion PeakMount Lawrence Grassi]