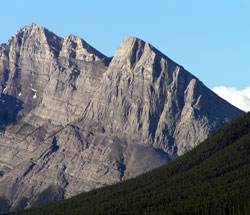 Photo: The summit of Mount Lawrence Grassi (left) and Ha Ling Peak from Highway #1A just west of the Park Gates

Province: Alberta
Park: Kananaskis
Headwater: Bow
Major Valley: Bow
Visible from Highway: 1, 742
Year Named: 1998
Named for: Ha Ling: (A railway worker who won a bet in the Canmore area by climbing the peak and returning to the Bow Valley in five and one half hours.)

The mountain was formerly officially named Chinaman's Peak. Although not made official until 1980, the mountain was named in 1886 in honour of Ha Ling, a Chinese cook at a mining camp. According to the Medicine Hat News of October 24, 1896, the previous weekend had seen a feat of remarkable mountain climbing near the town of Canmore. In the "Canmore Cullings" column in that issue, it was reported that Ha Ling, a cook from China who worked at the mining camps, won a fifty-dollar bet. He bet some of his co-workers that he could climb to the top of the peak, plant a flag, and return to the town in ten hours. Not only did he accomplish the task he did it in five and a half hours. Following pressure from the Chinese Community, the name was removed in 1997 and officially renamed Ha Ling Peak the following year.

However, this may not be the end of the story. Lorraine Widmer-Carson reported that Brian Dawson's book, "Moon Cakes in Gold Country - From China to the Canadian Plains," tells a different tale but one that still involves a Chinese cook and the bet. According to Dawson, it wasn't Ha Ling but Lee Poon (a cook at the Oskaloosa Hotel) who climbed the mountain and the bet was for $10.

In 1841, James Sinclair, a University of Edinburgh educated leader of the Red River Metis, led a party of emigrants from the Red River Colony in present day Manitoba to Oregon. The journey was instigated by George Simpson, governor of the Hudson Bay Company, in order to reinforce the British and Hudson Bay Company's presence in the area.

The party was made up of 23 Metis families totaling 121 people, including a 75 year old man and babies born during the trip. They travelled first to Fort Edmonton and then proceeded south to enter the mountains at Devil's Gap. They travelled along the south side of Lake Minnewanka, over a pass between Mount Peechee and Princess Margaret Mountain and then down Carrot Creek to the Bow Valley. After travelling a few kilometres down the Bow Valley they abandoned their Red River Carts and ascended to White Man Gap between Ha Ling Peak and Mount Rundle, travelled up the Spray valley to White Man Pass, descended the Cross River to the Kootenay River from which they crossed Sinclair Pass (below Mount Sinclair) to the Columbia and eventually reached Oregon.

In 1854, Sinclair guided by the Cree chief Maskepetoon who claimed to have knowledge of a shorter route, led a second party to Oregon from Red River, this time a group of about one hundred driving 250 head of cattle. After receiving reports of a shorter route, they travelled up the Kananaskis River and are thought to have crossed North Kananaskis Pass, a remarkable accomplishment although the route turned out to be much lengthier than that followed in 1841.

Sadly, James Sinclair was shot and killed in 1856 when Indians attacked an American post on the Columbia River that he happened to be visiting.

Photo: Ha Ling Peak from Highway #1A near Canmore

Looking north to Ha Ling Peak from the Smith-Dorrien Road

Looking south to Ha Ling Peak from the Trans-Canada Highway

Looking southwest to Ha Ling Peak from the Trans-Canada Highway