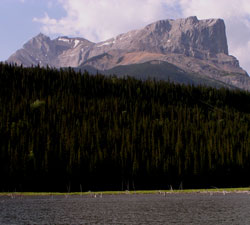 Roche Miette dominates the entrance to the Rockies and Jasper National Park from the Athabasca River valley and from the Yellowhead Highway (#16). In their book, "The Northwest Passage by Land," (1865) William Fitzwilliam (Viscount Milton) and Walter Cheadle describe the northern cliffs of the mountain as they approached from the east as, "a cleft in the range, cut clean as with a knife" and that showed, "what we supposed to be the opening of the gorge through which we were to pass." When James Hector visited the area in 1859 he wrote that, "Miette's Rock is a bold object, bounding the valley of the Athabasca to the south, and resembling the "Devil's Head," which lies to the north of the Bow River. He tried to climb the mountain with Moberly, reaching a sharp peak high above any vegetation but the great cubical block still towered above them and they could go no higher. In his book, "The Glittering Mountains of Canada," J. Monroe Thorington mentions that, "Dr. Hector (James Hector of the Palliser Expedition who travelled up the Athabasca Valley during the winter in early 1859) always enjoyed a mountain-scramble and wrote, "I started with Moberly to ascend the Roche Miette... After a long and steep climb, we reached a sharp peak far above any vegetation, and which, as measured by the aneroid, is 3500 feet above the valley. The great cubical block which forms the top of this mountain, still towered above us for 2000 feet, and is quite inaccessible from this side, and is said to have been only once ascended from the south side by a hunter named Miette, after whom it was named." Legend has it that Bonhomme Miette was a French-Canadian voyageur who made the first ascent, climbing it from its south side. He became a well-known figure in French Canadian folklore and was said to have been a gifted fiddler and storyteller. When he reached the top, the story goes, he sat down, dangling his feet over the precipice, smoked his pipe, and as Miette himself put it, "I been have de nice smoke up dere wit St. Peter on de gate." During the 1830's it is known that a man named Miette did live in the Athabasca Valley where he was a, "company servant" who hauled coal from the area of Roche Miette to Jasper House as well as to Henry House at the mouth of the Miette River. [Fraser] but Ben Gadd believes that Bonhomme Miette was a legendary voyageur as no one by that name worked for either the Hudson Bay Company or the Northwest Company during the years prior to 1814. Ben Gadd, author of "Handbook of the Canadian Rockies," feels that the name is derived from the Cree word "Myat," which means "bighorn sheep." He thinks that this makes a lot of sense, considering that sheep frequented the lower slopes of the mountain. According to Don Beers, author of "Jasper-Robson -A Taste of Heaven," the name was first recorded as Roche Miette in a journal written by Gabriel Franchere. However Don feels that the mountain was likely named after a voyageur named Baptiste Millette, who worked in the fur trade in the Athabasca River area during 1812 and 1813. Many early travelers wrote of Roche Miette with admiration but their enthusiasm was tempered by the barrier it presented. Roche Miette slopes steeply into the Athabasca and posed a serious obstacle to those travelling up the south bank of the river. Steep, downward sloping slabs of slippery rock often sent horses sliding down into the river at what became known as "Disaster Point." Early travelers attempted to negotiate a dangerous trail that climbed some 395 metres above the river. One referred to, "a very narrow pathway, with a perpendicular wall of rock on one side, and a steep declivity down to the edge of a precipice several hundred feel high on the other." The dangerous "nose" of Roche Miette remained an obstacle until it was blasted away by the railway builders in the early 1900's. Arthur Coleman exited the Canadian Rockies via the Athabasca Valley in 1907, describing Roche Miette as, "The most impressive bit of architecture along the Athabasca, pushing its bold front out into the valley like a commanding fort with unscalable walls three thousand feet high, and a flat top somewhat parapeted and loop-holed."