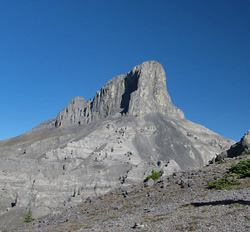 Devil's Head's distinctive shape is formed by 250 metre cliffs on the north, east, and south sides combined with a fairly flat-topped summit. This creates a mountain which, consistent in profile, is easily identified from any viewpoint to the east. Following a snowfall, the near vertical cliffs remains black while the surrounding peaks are white and this makes the mountain even more eye-catching. Evidence of its prominence is the fact that the mountain and its name were mentioned several times in Peter Fidler's 1792 journal. It was the first peak to be referred to by name by a white visitor to the Rockies. Fidler first saw the mountain on November 28 and wrote in his journal that he got a bearing on, "a remarkably high cliff of the Rocky Mountains called by our People (the Indians travelling with him), the Devil's Head." (The name Devil's Head is a translation of the Stoney Indian name based on the mountain's shape.) George Simpson passed by the peak in 1841 and described it as having a, "rude resemblance to an upturned face." It is said that the mountain was somewhat feared by the natives who had superstitious stories about it. In her book, "West of the Mountains: James Sinclair and the Hudson's Bay Company," Geneva Lent wrote, "As the train drew closer to the main range of the Rockies, a great grey escarpment seemed to loom directly before them, as if to block all entry to the mountains. The Cree Indians so feared theis peak they made propitiatory offerings to its Manitou in the form of pipes, tobacco, and decorated tomahawks on certain of its ledges." On 7 August, 1858, as he approached the mountain front, James Hector noted the feature as well, writing, "Half an hour after starting this morning we came to Deadman's River (Ghost River), and found that the plain we had been admiring the previous evening was really the valley of that river, which rises near the 'Devil's Head'" W.S. Drewry, an assistant to James McArthur, attempted to climb the mountain in 1891 while in the area surveying but was turned back by the precipices below the summit. The peak's challenging cliffs must have been noticed by all the early mountaineers as they journeyed by train to make first ascents in the more spectacular main ranges of the Rockies during the early part of this century. However, Devil's Head's somewhat isolated location and distance from the railway combined to delay the first ascent until 1925 when J.W.A. Hickson and L.S. Crosby climbed the mountain from the west, guided by Edward Feuz jr.