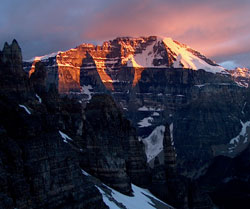 "Through a vertical opening in the cliffs at the head of the lake, Mount Lefroy looms in the distance, crowned with a helmet of perpetual snow and hanging glacier." -Walter Wilcox (Lake Louise Club -1900) Together with Mount Victoria, Mount Lefroy forms the spectacular backdrop to the view of Lake Louise from the Chateau. Abbot Pass lies between the two, hidden behind Mount Lefroy from the Chateau viewpoint. A glacier begins at the pass and flows down a narrow gorge known as the "Death Trap" on the Alberta side of the pass. The steep western slopes of Mount Lefroy were the scene of the first fatal climbing accident in the Canadian Rockies. Philip S. Abbot had considerable climbing experience, having climbed in the Alps. In 1895, together with Charles Fay, Charles S. Thompson, and others, he completed the first ascent of nearby Mount Hector from which Abbot seemed to develop an obsession with Mount Lefroy. Fay wrote, "…it seemed as though he dreamed of Lefroy by night and planned campaigns against it in the leisure moments of his active professional life." The following year, 1896, Abbott, together with Fay, Thompson, and George Little, attempted Lefroy on August 3rd. As they ascended the final 600 metres the steep ice slopes and poor rock were a concern, Fay later writing, "Caution governed every movement." After leaving the ice to climb on rock, Abbot, who had been leading, asked the others to unrope and wait so that he could advance more easily. Fay described what happened next, "A moment later Little, whose attention was for the moment diverted to another portion of the crag, was conscious that something had fallen swiftly past him, and knew only too well what it must be. Thompson and I, standing at the base of the cliff, saw our dear friend falling backward and head-foremost, saw him strike the upper margin of the ice slope within fifteen feet of us, turn completely over and instantly begin rolling down its steep incline." After a careful descent, Fay, Thompson, and Little reached their friend who died shortly thereafter. This was the first fatal climbing accident in North America. Abbot's father asked Professor Fay to make arrangements for a "Memorial Climb" the following year. The Alpine Club of London was asked to participate and Norman Collie and H.B. Dixon, together with guide Peter Sarbach, joined Fay's party. Exactly one year after the accident the party reached the summit. After a day's rest, Collie and Sarbach led the party that made the first ascent of Mount Victoria. There is some confusion as to the history of the naming of Mount Lefroy, including suggestions that it was named by James Hector of the Palliser Expedition in 1858. The only reference to the name Mount Lefroy in James Hector's journal entry was written while he was camped near Vermilion Pass. He wrote, "I then ascended the mountain to the east (likely Storm Mountain for 1,000 feet above our camp, reaching the limit of the woods after 500 feet. The mountain...is a mere spur from a large central mass of snow-capped mountains to the south-east, which I named Mount Ball ... On the opposite side of the valley I saw that the Vermilion River rises from a glacier of small size in a high valley of Mount Lefroy." The name “Mount Lefroy is printed at the location of today’s Mount Whymper on the Palliser Expedition’s map that was presented to Parliament in 1863.[McCart] A reference to Mount Lefroy is found in "Among the Selkirk Glaciers," by William Spotswood Green. When Green visited Silver City (near the present day Castle Junction) in 1888 and asked railway workers about Mount Lefroy they claimed they could see it from there. Green wrote, "They knew where Mount Lefroy was and it could have pointed out its peak to us but for the dense clouds of smoke, which made everything indistinct.” It’s not clear what the peak was that the two miners were referring to but the peak now known as Mount Lefroy is not visible from the site of Silver City. When Green visited Lake Louise, he was of the opinion that the mountain now known as Mount Victoria was Mount Lefroy. He wrote, "At the end of the lake the great precipice of Mount Lefroy stood up in noble grandeur, a glacier sweeping round its foot came right down to the head of the lake." The caption of an accompanying drawing leaves no doubt that Green was referring to Mount Victoria. George Dawson is likely the one who named Mount Lefroy. His 1886 map clearly shows Mount Lefroy in its current location although, oddly, there is no mention of Mount Victoria. It is not surprising that an eminent scientist such as Dawson would have been an admirer of General Sir John Henry Lefroy (1817-1890), an astronomer who was particularly interested in studying the magnetic declination from various locations in Canada and who eventually visited the site of the north magnetic pole. A painting by Paul Kane sold for $4.6 million, more money than any other Canadian painting, in February, 2002. It featured Sir John Henry Lefroy, an astronomer who became the head of the Toronto Observatory. Between 1842 and 1844 he travelled over 8800 km in the Canadian north making magnetic and meteorological observations, eventually mapping the location of the northern magnetic pole. [See Mount Kane]

Looking south to Mount Lefroy from the Icefields Parkway