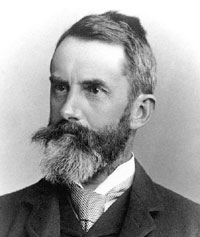 Rev. Willliam Spotswood Green and his cousin Rev. Henry Swanzy were the first to come to Canada to climb mountains. They visited the Selkirks in 1888, exploring and climbing from Glacier Hourse, the CPR hotel near Rogers Pass. Later that summer they visited Lake Louise, naming the mountain now known as Mount Victoria, Mount Green. His book "Among the Selkirk Glaciers," aroused much interest in the "Canadian Alps" and Green's visit is said to have marked the birth of mountaineering in Canada.