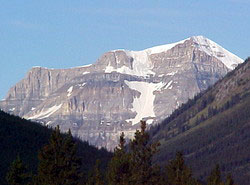 This impressive peak at the head of Redearth Creek may be seen from the Bow Valley Parkway, east of Castle Junction. It forms the backdrop to Shadow Lake, one of the largest lakes in Banff National Park.

James Hector noted the peak as he travelled up the Bow Valley in 1858, writing, "Through a deep valley (Redearth Creek)to the southwest is a very massive mountaian, completely snow capped." This view may be enjoyed from just northwest of southeastern edge of the Hillsdale Slide on the Bow Valley Parkway.

James Hector's journal entry written near the summit of Vermilion Pass has a reference to Mount Ball. It reads as follows: "The source of the stream flowing to the east [Altrude Creek] is from a deep lake with rocky margins...A stream of muddy water, about 12 feet broad, descends from the north-west, and when within 300 yards of this lake turns off to the south-west, forming the first water we had seen flowing to the Pacific. We encamped beside this stream...I then ascended the mountain to the east for 1,000 feet above our camp, reaching the limit of the woods after 500 feet. The mountain...is a mere spur from a large central mass of snow-capped mountains to the south-east, which I named Mount Ball."

In Volume I of the Interprovincial Boundary Survey, Arthur Wheeler wrote, "The summit of Mount Ball is clad with perpetual snow. Its east face is a precipitous rock escarpment falling nearly 4000 feet to the valley of Shadow Lake; in fact the whole east face of the group shows a similar escarpment, lined and hung with pocket and cliff glaciers and beds of snow set high on the ledges."

An Irishman, John Ball was a contemporary of John Palliser and a good friend of the Palliser family. He was a great supporter of the formation of the Palliser Expedition and its likely contribution to scientific knowledge in general. An enthusiastic amateur botanist, he was interested in those scientists who were accumulating collections and records of the various species of plants from all over the world.

Ball recommended that the government finance the Palliser Expedition and consulted a number of scientists, including Charles Darwin, to discuss the work to be done and the individuals that should be involved. He personally recommended that Eugene Bourgeau join the expedition as the botanist. [Spry]

For a panoramic view from the summit of Mount Ball visit www.canadasmountains.com.