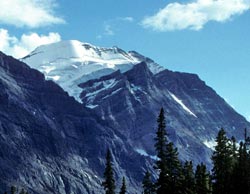 Mount Kain, named after the highly respected early guide Conrad Kain, is in the Mount Robson area. It is an interesting coincidence that Conrad Kain led the first ascent of Mount Kane. PAUL KANE (1810-1871) Born in Ireland, Paul Kane came to Canada as a boy and studied art at Upper Canada College. He developed at interest in the natives of what is now western Canada. During his visit to the Canadian Rockies in 1846, Paul Kane travelled over Athabasca Pass in November, returning to the prairies again via the same pass the following year. Both trips over the pass were made in very cold weather. Kane's sketches and watercolours chronicle the west in the years prior to photography. Following his return to Toronto, he spent six years making a series of 100 large oil paintings from his work. A painting by Paul Kane sold for $4.6 million, more money than any other Canadian painting, in February, 2002. It featured Sir John Henry Lefroy, an astronomer who became the head of the Toronto Observatory. Between 1842 and 1844 he travelled over 8800 km in the Canadian north making magnetic and meterorological observations, eventually mapping the location of the northern magnetic pole. Mount Lefroy was named in his honour in 1858 by James Hector of the Palliser Expedition. [See Mount Lefroy] [Additional information: "The Canadian Rockies" by Esther Fraser; page 50]