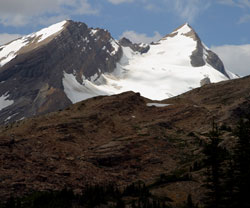 In 1896 a German mountaineer named Jean Habel was entranced by a distant, glacier draped, pyramid-shaped peak "flashing and then disappearing in the distance" as his train descended the Big Hill on the western approach to Kicking Horse Pass. Mount des Poilus is the mountain which caught Jean Habel's eye and it may be seen beyond and to the right of Whaleback Mountain from the Spiral Tunnel Viewpoint as the Trans-Canada Highway descends into British Columbia from Kicking Horse Pass. Glacier des Poilus covers its southwestern slopes and an extensive area at its base. Arete Peak is the rocky ridge to the left of Mount des Poilus. An arete is a narrow ridge with steep slopes on both sides. The Interprovincial Boundary Commission assigned this name probably because they were impressed with the arete which connects the mountain with Mount des Poilus. Jean Habel had named the mountain he saw from the train "Hidden Peak" because it seemed to disappear and then reappear as he descended the Big Hill in 1896. The following summer he spent seventeen days exploring the Yoho Valley, in part attracted by the mysterious mountain. In 1900, Norman Collie re-named the peak Mount Habel in honour of the Yoho?s first visitor who had died in the meantime. One week following the armistice which ended the First World War, eleven peaks in the Kananaskis Area were named after prominent French military leaders who had served during the confict. "Les Annales," a French publication, had suggested that one mountain be named, "for the great hero of the age, the humble and fascinating poilu (the lowest ranking soldiers of the French Army) who had battled the invading Germans." Arthur Wheeler was asked to recommend a peak and the fact that he chose Mount Habel to become Mount des Poilus may have had something to do with the fact that Jean Habel was a German citizen. However almost seventy years later Jean Habel?s name was again placed on a mountain in the Canadian Rockies. Author Graeme Pole?s suggestion that a peak on the Continental Divide just north of Yoho National Park be named Mount Habel was accepted by the authorities in 1987.