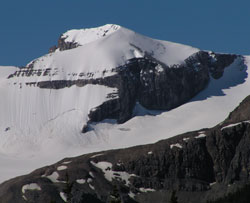 Photo: Looking southwest up the Peyto Glacier Valley to Mount Habel from the Icefields Parkway

This peak is still commonly referred to as the north summit of Mount Rhondda. However, it was officially named Mount Habel in 1985 at the suggestion of author Graeme Pole.

Mount Des Poilus, some 7 kilometres to the west-southwest was originally named Mount Habel. In 1886 a German mountaineer named Jean Habel was entranced by a distant, glacier draped, pyramid-shaped peak "flashing and then disappearing in the distance" as his train descended the Big Hill to the west of Kicking Horse Pass.

Jean Habel named the mountain he saw from the train "Hidden Peak" because it seemed to disappear and then reappear as he descended the Big Hill in 1886. The following summer he spent seventeen days exploring the Yoho Valley, in part attracted by the mysterious mountain. In 1900, Norman Collie re-named the peak Mount Habel in honour of the Yoho?s first visitor who had died in the meantime.

One week following the armistice which ended the First World War, eleven peaks in the Kananaskis Area were named after prominent French military leaders who had served during the confict. "Les Annales," a French publication, had suggested that one mountain be named, "for the great hero of the age, the humble and fascinating poilu (the lowest ranking soldiers of the French Army) who had battled the invading Germans."

Arthur Wheeler was asked to recommend a peak and the fact that he chose Mount Habel to become Mount des Poilus may have had something to do with the fact that Jean Habel was a German citizen.

In 1985, at the suggestion of author Graeme Pole, the mountain known as the north summit of Mount Rhondda was renamed Mount Habel.

Photo: Looking southwest up the Peyto Glacier Valley to Mount Rhondda (left) and Mount Habel from the Icefields Parkway