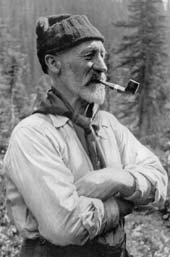 Irish-born, Arthur Wheeler came to Canada with his parents when he was sixteen. He apprenticed as a Dominion Land Surveyor and by the time he was eighteen was travelling the Canadian prairie in a Red River cart. He served with the Surveyor Intelligence Corps during the Reil Rebellion of 1885 and then worked extensively on irrigation surveys in southern Alberta. In 1900 he surveyed in the Crowsnest Pass area of the Canadian Rockies where he became familiar with the Deville's newly developed topographical surveying techniques that made extensive use of photography. In 1901 he was assigned to survey in the Selkirks based at Glacier House and in particular to map areas utilized by tourists and mountain climbers. Under the instruction of the recently arrived Swiss guides stationed there, he rapidly upgraded his mountaieering skills.

Following extensive work mapping and writing a guide book for the Selkirk Mountains in the vicinity of Rogers Pass, Wheeler shifted his interest to the Canadian Rockies and played the leading role in the Interprovincial Boundary Survey.

Those involved in the survey that established the Alberta-British Columbia border were responsible for the naming of more peaks than any other group. The survey was begun in 1913 and continued every summer until 1925. It was a major effort that involved much detailed mapping in the areas adjacent to the border as well as the actual delineation of the boundary itself. The photographic survey method developed by Dr. Edouard Deville (see Mount Deville) was utilized.

The British Columbia representative was Arthur Wheeler who had previously completed some detailed surveys in the Selkirks and he was assigned the mapping in the high mountains between the passes.

Wheeler became the man most associated with this project that delineated some one thousand kilometres of the Continental Divide. As well as having a professional interest in travelling through the mountains, Wheeler was the motivating force behind the creation of the Alpine Club of Canada. He became its first president in 1906 and continued to serve on its executive until 1927. Through his involvement with the Boundary Survey and the Alpine Club over four decades, Arthur Wheeler probably saw more of the Canadian Rockies than any other person. A mountain in a remote part of the Selkirk Range carries his name.