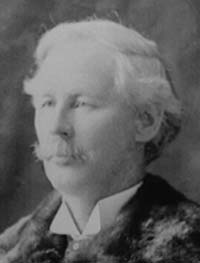 James Joseph McArthur was a Dominion Land Surveyor who worked in the Rockies (often with W.S. Drewry) from 1886 to 1893, completing a topographic survey of the mountains along the Canadian Pacific Railway's main line from Canmore to the summit of the Gold Range. William Stuart Drewry and Arthur St. Cyr were also D.L.S. surveyors and assisted him. He mapped 5000 square kilometres at a scale of 1:20,000 and contour interval of 100 feet. In the course of this detailed work, he made some of the earliest first ascents in the Rockies including such well known peaks as Mount RundleMount BourgeauMount StephenBig SisterArthur Wheeler, a colleague of McArthur's who spent much of his professional life surveying the Continental Divide through the Rockies, wrote of McArthur, "He is a quiet, unassuming man, who has probably climbed more mountains in these regions than any other person, and has made a large number of first ascents. No flourish of trumpets ushered him forth to conquest, no crown of laurels awaited his victory; a corps of trained Swiss guides was not at hand to place his footsteps, to check his down-slidings, and select for him the surest road. With one assistanct, transit, and camera on back, many a perilous climb has been made, the rope only being used in the case of most urgent need. In all kinds of weather, through snow, over ice, and in pouring rain, many a difficult ascent has been accomplished, many privations encountered and much hardship endured; the only record being a few terse paragraphs in the Departmental Bluebook..."

In his book, "Pushing the Limits -The Story of Canadian Mountaineering," Chic Scott refers to J.J. McArthur as "The first Canadian mountaineer." For many years J.J. McArthur was the authority on the Rockies west of Calgary. As well as Mount McArthur at the head of the Little Yoho Valley, a lake in the Lake OÍhara area, which is one of the most beautiful in the Rockies, was named in his honour.

Following his work in the Rockies, McArthur surveyed in the Yukon, spent time mapping the international border between Lake Superior and the Continental Divide and in 1917 became the Canadian Commissioner on the survey which delineated the border between Alaska and the Yukon.