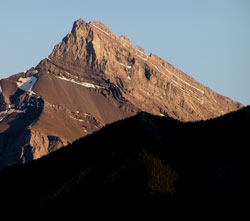 Looking south to Big Sister from the Trans-Canada Highway

One of the most photographed views in the Rockies, The Three Sisters are probably recognized by more people driving along the Trans-Canada Highway than any of the other mountains in Alberta. They are also the peaks most associated with the community of Canmore, which has evolved from a railway siding and coal mining town to its current status as a thriving tourist related community. Big Sister is the highest of the Three Sisters and features three distinctive notches in its southwest ridge that forms the skyline when the peak is viewed from Canmore. Although James Hector did not name the mountains, the geologist of the Palliser Expedition clearly appreciated the view from what is now the Canmore area and wrote in his diary, "Towards evening an excellent camping place was reached opposite a mountain with three peaks, which forms a very imposing group. In a nearby clearing we made camp and stayed for several days making a geological study of the rock formation." It was Albert Rogers, a nephew of Major Rogers, the discoverer of Roger's Pass in the Selkirk Mountains, who named the three peaks in 1883. He recalled, "There had been quite a heavy snowstorm in the night, and when we got up in the morning and looked out of the tent I noticed each of the three peaks had a heavy veil of snow on the north side and I said to the boys, 'Look at the Three Nuns.' They were called the Three Nuns for quite a while but later were called the 'Three Sisters,' more Protestant like I suppose." It is thought that the three were individually known as "Faith," "Hope," and "Charity" during the three years that the group was known as "The Three Nuns." The name "Three Sisters" first appeared on George Dawson's map of 1886 and it is quite likely it was he who thought that the name Three Sisters would be more appropriate. Big Sister, the highest of the Three Sisters, was first climbed in 1887 by James J. McArthur. The centre peak is known as Middle Sister. The lowest, named Little Sister, is a much more difficult ascent and was not climbed until 1925 by a party led by Canmore's most illustrious mountain man, Lawrence Grassi.

Looking north to Big Sister from the Smith-Dorrien Road

Looking southwest to Big Sister from the Trans-Canada Highway

Looking north to Big Sister from the Smith-Dorrien Road