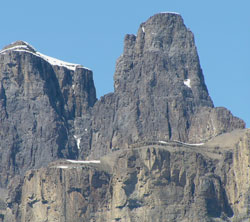 51.2997N -115.923W
Located in the Bow Valley opposite Vermilion Pass; the southeastern end of Castle Mountain

Eisenhower Peak is the tower shaped feature at the southeastern end of Castle Mountain.

James Hector was still nineteen kilometres down the Bow Valley from what is now known as Castle Junction when he decided what the name of this mountain should be. He noted, "a very remarkable mountain... which looks exactly like a giant castle."

Despite the daunting cliffs visible from the Bow Valley, Castle Mountain was one of the first peaks of the Canadian Rockies to be climbed. After visiting the Selkirk Mountains in 1884, Arthur Coleman stopped below Castle Mountain and ascended to camp in "the beautiful Horseshoe Valley behind the Castle" from which he made the first ascent of the mountain. Coleman wrote, "Some of the climbing was quite risky work, since the projecting knobs of rock were often loose, and gave way under the hand or foot. Above the edge of the cliff, however, going was easy, so that the highest part of the Castle was not hard to reach, and the wonderful view of the valley of Bow River, four thousand feet below, was quite worth seeing. The tower [Eisenhower Peak] standing in front of the Castle to the south-east looked as unscalable as it was reported to be."

Geologically, Castle Mountain is noteworthy because it is the eastern-most of what geologists refer to as the "main ranges" of the Alberta Rockies. They differ from the front ranges in that the rock is generally older and is relatively flat-lying, the various peaks having been sculptured by glacial and other forms of erosion. The layers of rock involved vary in their resistance to erosion, the harder rock such as limestone being more resistant and softer rock such as shale eroding more easily. Castle Mountain demonstrates these principles with its two major cliffs of limestone being separated by a ledge which corresponds to a layer of shale.

The Castle Mountain Fault has thrust the older (400-600 million years) limestone which forms the cliffs over younger (200 million years) rock which has eroded and forms the tree covered base of the peak. This fault defines the boundary between the main ranges and the front ranges and can be traced throughout Banff and Jasper Park where it passes between the Pallisades and Pyramid Mountain, just east of Jasper Townsite.

After being named Castle Mountain by James Hector because of its fortress like appearance, it was renamed Mt. Eisenhower in 1946 in honour of American General Dwight D. Eisenhower, the Supreme Commander of the Allied Forces during the final year of World War II. Bowing to public pressure the naming authorities officially changed the name back to Castle Mountain in 1979. However, as a compromise, a prominent feature on the mountain was given the name "Eisenhower Peak."

The decision to rename Castle Mountain, Mount Eisenhower was made by Prime Minister Mackenzie-King on the day before the President was to pay a visit to Ottawa. As much as Eisenhower was respected, this arbitrary decision so enraged the Alberta government that it immediately formed its own geographical names board. But it took thirty-three years and an Albertan as Prime Minister before Castle Mountain regained its original name.

Looking north to Eisenhower Peak from the Bow Valley Parkway

Photo: Looking northeast to Eisenhower Peak from the Bow Valley

Looking north-northeast to Eisenhower Peak from the Bow Valley Parkway