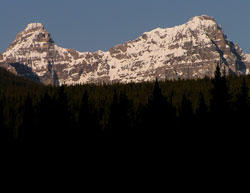 51.2919N -116.220W
Located on the continental divide in the Valley of the Ten Peaks between Moraine Lake Valley and Tokumm Creek

SAMUEL E.S. ALLEN (1874-1945) Samuel Allen was born in Philadelphia and was one of the first to explore the Lake Louise area. By 1890 the first small "Chalet" had been built near the shores of Lake Louise. In 1894 Yale College students Samuel Allen of Chicago, Walter Wilcox of Washington, and three others paid $12 per week for accommodation, meals, and the use of horses and a boat. Allen and Wilcox had visited the area before and had failed in attempts to climb Mount Victoria, Mount Temple, Mount Lefroy, Mount Aberdeen, and Mount Temple where, "Many a hearty cheer rent the thin air as our little party of three reached the summit, for we were standing where no man had ever stood before, and...at the highest altitude yet reached in North America north of the United States boundary." Despite the successful ascent of Mount Temple, the group's inexperience in climbing had been demonstrated on Mount Lefroy and through the summer their limitations regarding glacier travel and cooking (one of the group recalled forty years later that he, "still remembered that stomach ache") led to other near disasters. But they persevered and when the club's members returned to their homes in the eastern United States, they had explored over one hundred square kilometres of country around Lake Louise. As well, the group chose the names of many of the lakes and mountains in the area, made a detailed map, and measured the depth of Lake Louise. A major contribution was "Camping in the Canadian Rockies," by Walter Wilcox. The first major book about the Rockies, it was to inspire many others to explore and climb in the Canadian Rockies. "No scene has ever given me an equal impression of inspiring solitude and rugged grandeur." This was Walter Wilcox's reaction when he was one of the first visitors to the Valley of the Ten Peaks. In 1894 his companion, Samuel Allen, had chosen to name the peaks from east to west using the numbers from the Stoney Indian language as follows: Heejee, Nom, Yamnee, Tonsa, Sapta, Shappee, Sagowa, Saknowa, Neptuak, and Wenkchemna. A number of Stoney Indians had been hired to look after the horses used by Wilcox and his group and Allen must have learned the numbers from them. All but two of the peaks have subsequently been renamed to honour a variety of individuals.