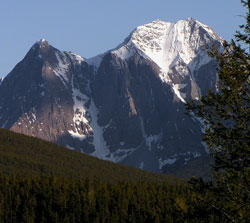 Photo: Looking south to Allan Peak from the southern end of the Emerald Lake Road

A Scottish-born Canadian shipping magnate, railway promoter, financier and capitalist, Sir Hugh Allan became the richest man in Canada with a personal estate estimated at about $8 million. By the 1870s, Allan had become a well-known railway entrepreneur. He coordinated a group of companies who proposed to build the Canadian Pacific Railway which had been promised to British Columbia if they joined Confederation. To get the contract, it is said that he bribed Prime Minister Sir John A. Macdonald by donating to his re-election campaign in 1872, but the Pacific scandal (and Macdonald's defeat) ended Allan's dreams of supremacy in the railway business. The above information regarding the origin of this mountain's name is taken from, "Place Names of the Canadian Alps" by Putnam, Boles, and Laurilla. However, information presented on the British Columbia Geographical Names website states that it is named after John Andrew Allan (1884 - ) who was with the Geological Survey of Canada from 1906 to 1916. The site goes on to say that Dr. Allan mapped this area 1910-11 and that he later became a professor of geology at the University of Alberta, Edmonton. This is the same individual that Mount Allan in the Kananaskis Valley is named for.