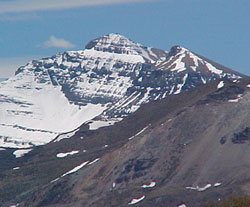 Lying near the headwaters of Yarrow Creek, the mountain was named by Morris Bridgland in 1915 after a range of mountains in County Donegal in Ireland. Glendownan means "deep glen" and Morrison Bridgland may have been influenced by the narrow, steep walled valley to the northeast of the mountain.

This attractive peak features a distinctive band of snow just below the summit in late spring when viewed from the east. It is higher than and set farther back than neighbouring Cloudy Ridge and the eastern end of Spionkop Ridge.