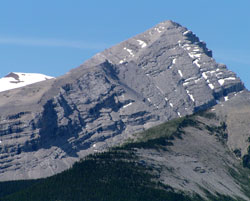 Photo: Mount Glasgow from the northeast on Hwy. #66 (Mount Cornwall beyond at left)