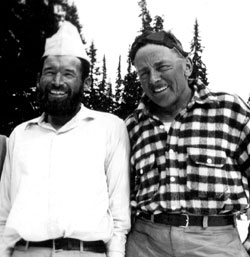 According to Chic Scott, "Rex Gibson was one of Canada's leading mountaineers, both summer and winter, for more than thirty years."

Thanks to Lindsay Elms for permitting the following biography to be published on www.peakfinder.com.

Evelyn Reginald (Rex) Gibson was born at Hatfield Peveril in Essex, England on November 7, 1892. He was educated at Mowden Preparatory School and at Sherbourne School. At sixteen he went to work in a private bank in Paris, belonging to his family. This bank was later absorbed by Lloyds and after the war he served with the later in Cologne and Antwerp. He was fluent in French and German and was always happy to converse with the guides and others in these languages.

Gibson enlisted in the Artillery in September 1914, and received his commission in November, 1914. He saw action at Ypres, the Somme and Cambrai, and was appointed Staff Captain Royal Artillery III Corps, in January 1917. He was awarded the Military Cross and was three times mentioned in dispatches. In July 1926, Gibson immigrated to Canada and started farming at Winterburn near Edmonton in 1927. As a farmer he was able to arrange things so that he had the winters and summers available to climb and ski in the mountains.

Prior to coming to Canada Rex Gibson had made a few climbs in Switzerland, the notable one being a winter ascent of the Jungfrau during a ski tour in January 1925, however, once in the mountains of Canada he rapidly came to the forefront of mountaineering with his unique ability and skills. He was instrumental in introducing many young boys to the mountains especially through the Boy Scouts and he was also a very strong and fast climber and if he chose very few could keep up with him. During his thirty years of mountaineering in Western Canada he made over two hundred climbs, including many first ascents and in 1934 Gibson was awarded the Silver Rope Award for Leadership from the ACC. In 1936 he climbed Mount Clemenceau and Mount Robson with Sterling Hendricks and then in 1937 they climbed Mount Columbia and Twin North. Gibson later wrote: ñIt was a source of great satisfaction to Sterling and me that we made mountaineering history by being the first climbers ever to complete the ascent of all four 12,000-foot peaks in the Rockies.î In between climbing Clemenceau and Robson, Gibson, Sterling and Max Strumia made an unsuccessful attempt on Brussels Peak. This was considered the ñlast unclimbableî peak in the Rockies and finally fell, ten days later, to Robin (Bob) Hind and Ferris Neave. In 1938 Gibson climbed Mount Forbes and South Twin and in 1939 with Sterling Hendricks, Hans Fuhrer and Henry Hall he visited the Coast Mountains and made several first ascents including Mount Tiedemann. Then in 1946 was the first Canadian since Conrad Kain to ascend Bugaboo Spire. Along with many ACC summer camps he played a major role in the development and management of the Alpine Club of Canada's winter ski camps.

When W.W.II broke-out, Gibson rejoined the army in February 1941 with the Royal Canadian Artillery and was promoted to Major in 1944. During this period of service he was Canadian Military Representative with the U.S. ArmyÍs Mount McKinley expedition in 1942 to test cold weather equipment; was instructor at the Little Yoho Military Camp in 1943 when a number of members of the ACC gave instructions in mountaineering to an army group, and took part in the Lovat Scout training in Jasper Park in the winter of 1943-44. Gibson was injured during the McKinley expedition and was discharged from the army with a pension.

On June 12, 1948 he married Ethne Evelyn Mary Gale, the daughter of Brigadier-General Henry Richmond Gale and Kathleen Jane Villiers-Stuart, and they had one child: Kathleen Gibson. Ethne was a mountaineer in her own right and had graduated to active membership in the ACC in 1936 and made trips into the Comox Glacier and Forbidden Plateau on Vancouver Island. Rex Gibson sold the farm near Edmonton and moved to Saanichton near Victoria where he joined the Vancouver Island section of the ACC. Together they climbed a number of peaks on the island including Mount Whymper in 1949 and in 1953 he co-led an ACC trip to Big Interior Mountain with Doctor W.F. Mark Mitchell that included a young and energetic Syd Watts.

On August 18, 1957, Rex Gibson, Sterling Hendricks and Don Hubbard decided to attempt the first ascent of Mount Howson in the Buckley Range near Terrace. While cutting steps up a gully Gibson fell and pulled the others with him. Eventually they came to a stop. All of them were injured, however, GibsonÍs injuries proved to be fatal although at the time he was semiconscious. Hendricks went to get help but it was two days before they returned and by then Gibson was dead. He was sixty-four years old. A close climbing friend, Bob Hind wrote, "Rex's love for the mountains was more than a hobby; it became a passion which he was ever willing and eager to share with others." Rex was serving his second term as ACC President at the time of his death. In July 1959 the ACC sent an expedition to build a memorial on the mountain to Gibson. After building a solid rock cairn housing a bronze plaque at the south col, Adolf Bitterlich, John Owen and Bill Lash turned their attention to Mount Howson eventually making the first ascent to honour their fallen friend.