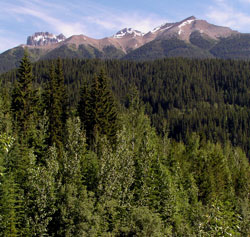 Arthur Wheeler, the most prominent of the early surveyors of the Canadian Rockies and one of the founders of the Alpine Club of Canada, wrote that he named this mountain after Sir Oliver Mowat (who had served as premier of Ontario 1872-1896), "...owing to a striking resemblance to his well-known features, when seen in profile from the Fraser Valley near the Junction of Grant Brook." Wheeler didn't say what Mowat's "well-known features" were. To me, the high point of the mountain looks like a head lying horizontally with very prominent "mutton chops" which Oliver Mowat had. Mount Mowat was first climbed in 1911 by George Kinney and Arthur Wheeler, guided by Conrad Kain.