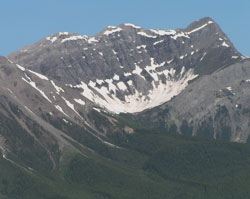 Photo: Mount Invincible from the Elpoca Viewpoint on the Valleyview Trail

Range: Spray
Province: Alberta
Park: Kananaskis
Headwater: Bow
Major Valley: Kananaskis
Visible from Highway: 40S, 742
Ascent Date: 1957
Ascent Party: F. Crickard, R. Higgins
Ascent Guide: Hans Gmoser
Year Named: 1917
Named for: HMS Invincible was a WW I Royal Navy battlecruiser which fought in the Battle of the Falkland Islands and later was part of he 3rd Battle Cruiser Squadron at the Battle of Jutland. It was sunk and only six of its crew of 1034 survived.)

From Highway #40 there are striking similarities between Mount Mount Indefatigable and Mount Invincible. They have similar profiles across their summits and their eastern slopes are steep near the summit ridges. The less steep slopes below these cliffs hold snow in a similar manner and this highlighting indicates that the layers of rock are oriented in the same manner. Both mountains are 2670 metres in elevation. These similarities must have been noticed by members of the Boundary Commission who named them after two warships which came to similar ends during the Battle of Jutland. HMS Indefatigable was part of the Second Battle Cruiser Squadron. Struck by five shells from the German Battleship Vonder Tann, it exploded and only two of the 1015 crewmembers aboard survived. HMS Invincible was Admiral Hood's flagship as he led the Third Battle Cruiser Squadron into the battle. Initially Hood's ships were successful in landing some heavy blows on enemy ships but then his flagship was destroyed by enemy gunfire with the loss of 1026 men. The general area containing Mount Warspite, Mount Invincible, and Mount Indefatigable is referred to as Mount Robinson on George Dawson's 1886 map of the Canadian Rockies.

Photo: Mount Indefatigable (left) and Mount Invincible from the Elpoca Viewpoint on the Valleyview Trail