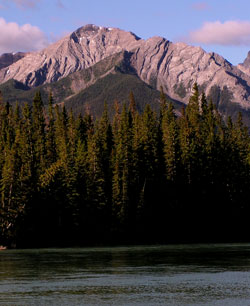 Howard Douglas (1850-1929) was named to honour the second superintendent of what was at the time, Rocky Mountain National Park, replacing George Stewart in 1896. He actively worked towards the enlarging of the park and was eventually successful in 1902 when the park was increased in size from 413 square kilometres to 11,400 square kilometres. Although Banff Park did not stay that large as a series of reductions were made until 1930, it was through this initial major expansion that a park of significant size was created. Douglas was a real conservationist. He worked hard to eliminate illegal hunting and in 1909 appointed Howard Sibbald as the first game warden in the park. He also played a major role in the building of a "paddock" in which examples of the almost extinct prairie bison were preserved. He later was involved in placing buffalo in Buffalo National Park near Wainwright and Elk Island National Park.