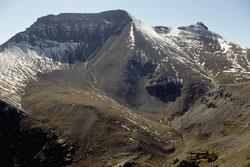 Range: Fisher
Province: Alberta
Park: Kananaskis
Headwater: Bow
Year Named: 1939
Named for: Howard, Terrence "Ted" (Ted was born in Pakistan and came to Alberta in 1898. After wartime service he was the forest ranger at the Elbow Ranger Station for 20 years from 1917 to 1937 and was highly regarded.