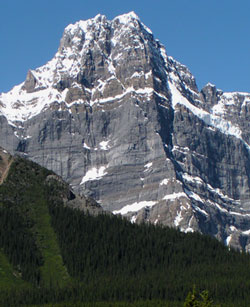 51.8128N -116.681W
Located on the continental divide in the Mistaya River Valley at the head of Chephren Lake; western buttress of Howse Pass

With an elevation of 3290 metres, Howse Peak is the highest mountain in the range which lies to the southwest of the Icefield Parkway from the Saskatchewan River to Bow Pass. Geographically it is significant because at its summit the Continental Divide makes a ninety degree turn and trends northeast-southwest for twenty kilometres, one of the largest shifts from the general northwest-southeast trend of Interprovincial Border. Howse Pass lies beyond the mountain and the huge basin occupied by the Freshfield Icefield lies even farther to the west.

A dome-shaped mountain when viewed from the Icefields Parkway, the base of Howse Peak is composed of dark, almost black limestone that forms a steep cliff with little indication of layering and virtually no snow highlighting. In contrast, the upper portion of the mountain is primarily reddish tinged layers of dolomite which allow for attractive patterns of snow highlighting in early summer.

Howse Pass and subsequently Howse Peak was named for Hudson's Bay explorer Joseph Howse. As part of the quest for a passage to Native groups of present day British Columbia, Howse and a party of seventeen traversed the pass in 1809. David Thompson of the North West Company had journeyed through this pass two years earlier. Yet, Thompson named the area after Howse whom he had met near the Kootenay Plains in 1809. The Pikuanni carefully guarded this stretch of the Rocky Mountains. They did not want either explorer to gain direct access to trade with western Native groups, such as the Kutenai. The Pikuanni were a formable threat which was possibly why Thompson went north, where he eventually explored and utilized the Athabasca pass. Although, Howse returned to England with a 1500 pound profit from a successful season trading with the Flathead peoples of present day Kalispell, Montana, the pass was deemed too dangerous for future trade. The Howse pass was not used by the Hudson''s Bay Company for another twelve years.(Jennifer Howse)

Norman Collie and party completed the first ascent of Howse Peak in 1902.