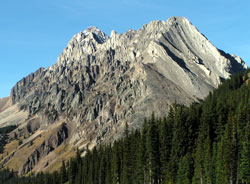 50.6650N -115.027W
Located north of the headwaters of Pocaterra Creek and the Elbow River southwest of Piper Creek

Vertically dipping strata forms the spectacular Elpoca Mountain. The name is derived from the fact that it lies to the north of Elbow Pass. The "El" portion of Elpoca is for the Elbow River which flows east from the pass and the "Poca" is for Pocaterra Creek which flows to the west.Elpoca Mountain can be said to be "half-named" after one of the most interesting characters to visit this area of the Rockies. George Pocaterra enjoyed travelling below this mountain during the early 1900's, generally from horseback. During one of his trips he named this mountain "Mount Paul" after his friend Paul Amos. Born in a valley of the Italian Alps, George Pocaterra attended university in Switzerland and was fluent in four languages. After coming to Canada as a young man, he established the Buffalo Head Ranch in the Highwood Valley which was eventually purchased by his close friend Raymond M. Patterson in 1933. As well as ranching, Pocaterra was involved in trapping, hunting, coal exploration, and in the general exploration of the area. Some of the trips undertaken with Raymond Patterson are described in Patterson's best known book, "The Buffalo Head." While becoming familiar with many untravelled areas in southern Alberta, Pocaterra made friends with the Indians. He was very proud of learning their native languages and folklore, and became blood brother to a Stoney named Spotted Wolf, travelling with him into the wild country of the Rockies when the only access was via ancient Indian trails. The country that George Pocaterra loved below what is now Pocaterra Creek changed extensively with the development of the Kananaskis Lakes to produce electrical power. Pocaterra wrote, "I was probably the first white man to see the beautiful lake district from the south. The most beautiful mountain scenery in the world, as far as I am concerned, was at these lakes, but now it is completely spoiled by the power dams, and the drowning of the marvelously beautiful islands and exquisitely curving beaches, the cutting down of the century old trees, and the drying up of the twin falls between the two lakes and of the falls below the lower lake." The valley to the east of Elpoca Mountain contains Piper Creek. Norma Piper, a coloratura soprano very active in the Calgary operatic community, became George Pocaterra's wife in 1936. Evidence of the breadth of George Pocaterra's interests is the fact that he acted as stage manager for the operatic company with which she sang. The ridge to the northeast of Elpoca Mountain is named Pocaterra Ridge and the mountain beyond in the Elk Range is unofficially named Mount Pocaterra. "The Diva and the Rancher -The story of Norma Piper and George Pocaterra" co-authored by David Finch and Jennifer Hamblin, is published by Rocky Mountain Books. It tells the story of George Pocaterra and Norma Piper, who became his wife. For additional details please see: www.rmbooks.com.

Photo: Looking south to Elpoca Mountain from the head of Piper Creek