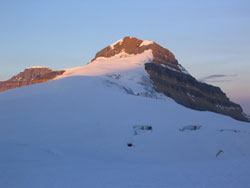 52.1494N -117.824W
Located between the Shackleton Glacier and Tsar Glacier at the head of Sullivan River

Derrick Ellis was a well-known helicopter pilot. He was employed by Bow Helicopters and had been Operations Chief at Golden since 1965, under contract to Evans Forest Products, when he went down with his machine 24 July 1972, at Gold River. According to Glen Boles, the information on the B.C. place names website is incorrect in stating that William T. Sharp & Roly Morrison, ACC members from Calgary, made the first ascent of this mountain and had named it in Derrick Ellis' memory.