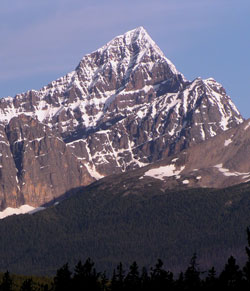 In 1872 Reverend George Grant first saw this mountain from the Athabasca River Valley, north of Jasper. He referred to it as, "a great mountain, so white with snow that it looked like a sheet suspended from the heavens." In the first "Description of and Guide to Jasper Park," Arthur Conan Doyle wrote, "To the south, the dominating feature of the landscape is Mount Edith-Cavell, its massive top frequently clothed in clouds... Almost due south of Jasper (Townsite) and about fourteen miles distant in a straight line, (this) massive snow-crowned mountain rises high above the surrounding peaks, its white summit sometimes glistening in the sunlight, but often lost among the clouds. Below, some hanging glaciers showing white against its dark precipitous rocks, discharge their masses of snow and ice into a large glacier just visible in the valley beneath." Mount Edith-Cavell is clearly one of the dominant peaks from the northern end of the Icefield Parkway, being visible for some distance from the southeast and to Jasper and beyond on Highway #16. From Jasper, the mountain has a distinctive profile and the steep cliffs of its north face are always highlighted by snow that follows the strata as it dips gently down to the west. In 1924 a road was built up the Astoria River valley to beyond Cavell Lake, allowing access to the base of this impressive peak. EDITH LOUISE CAVELL Edith Louise Cavell was born in 1865 in Norfolk, England. At the age of twenty she entered the nursing profession and in 1907 was appointed the matron of the Berkendael Institute in Brussels where she greatly improved the standard of nursing. After the German occupation of Belgium she cared for wounded German troops but also became involved with an underground group which assisted some two hundred British, French, and Belgian soldiers who were trapped behind enemy lines to escape to neutral Holland and rejoin their armies. Sheltered at the Institute, which had become a Red Cross hospital, they were provided with money and guides by Philippe Baucq, a Belgian. This was regarded as treason under German Martial Law and was punishable by death. In August 1915 Edith Cavell was betrayed by a spy who asked her to help him escape and Cavell and several others were arrested, tried by a court-martial, and sentenced to be executed. Her defence was that as a nurse she was duty-bound to save lives and she was doing just that by concealing and helping hunted men to return to their homes. Although neutral governments, including the United States and Spanish representatives, tried to have their death sentences reprieved, both she and a Philippe Baucq, were shot on October 12th. Her last words were, "I see now that patriotism is not enough. I must have no hatred or bitterness towards anyone." Technically, the enemy did have a case, but it was a case that completely failed to be accepted by world opinion because espionage was not involved. Her execution was considered outrageous and widely condemned. Although she saw herself simply as, "a nurse who tried to do her duty," she was clearly and widely regarded as a martyr. British propaganda abroad and at home made the most of the incident. After lying in state in Westminster Abbey, Edith Cavell was buried in Norwich Cathedral. The incident was also important from the point of view of the question of women''s rights and it was written that, "She has taught the bravest man amongst us a supreme lesson of courage; and in this United Kingdom and through the Dominions of the Crown there are thousands of such women, but a year ago we did not know it." The Premier of British Columbia was the first to suggest that a mountain be named in her honour, suggesting the highest peak in the Canadian Rockies, Mount Robson. Prime Minister Sir Robert Borden agreed with having a mountain named but instructed the Geographic Board of Canada to make the decision as to which one. The mountain was referred to as "La Montagne de la Grande Traverse," by the voyageurs of the early nineenth centurey. Once they passed it on their journey to Athabasca Pass, they left the main valley and began the long trek to the continental divide. Later the peak became known as "Fitzhugh" and then "Geikie," the mountain was officially named Mount Edith Cavell in March of 1916, just five months after the execution. As well as having this beautiful mountain named after her, she is commemorated by a statue just off Trafalgar Square in London. A memorial service for Edith Cavell is held each year in the Anglican Church in Jasper. Edith Cavell''s Belgian defence lawyer, Gaston de Leval, has a Canadian mountain (Mount Leval) named in his honour near Palliser Pass at the southern boundary of Banff National Park. Although the mountain''s name is usually pronounced, "Kuh-VELL," Ben Gadd reports that Edith''s family, from Norwich, pronounced their name in such a way that it rhymes with "travel."

Photo: Looking south to Mount Edith Cavell from the Athabasca River Bridge on the Icefields Parkway