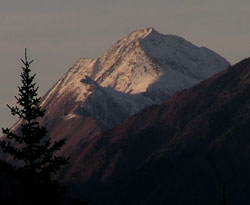 Edward Gaston Deville was born in France in 1849. After being educated at the naval school in Brest he joined the French navy and supervised extensive hydrographic surveys in the South Sea islands, Peru, and elsewhere. Upon retiring from the navy in 1874 he came to work in Canada as a surveyor with the Government of Quebec. In 1881 he became inspector of Dominion land surveys, and in 1885 was appointed Surveyor General of Canada

Deville had taken an early interest in the possible uses of photography for surveying. While a student at the French Naval College at Brest, he heard of the experimental use of photography in the mapping of Paris by Aim? Laussedat (see Mount Laussedat), a French army engineer.

Deville studied the relationship between geometry and photography. He built a rugged camera suitable for Canadian conditions that could withstand long trips over rough trails and that required little adjustment in the field.

The method known as phototopography was ideal for surveying in the mountains where the time available for surveying was limited by the lengthy time required to reach and return from the summits, a short season, and frequent cloudy or smoky conditions. With the new method, surveyors could take photographs of fairly large areas and complete the calculations and mapping in an office during the winter. "We often reached the mountaintop...and remained in mist all day hoping it might clear; only to be obliged to descend without having accomplished anything," complained mountain surveyor James McArthur after one particularly long stretch of bad weather.

Deville gave his first camera to James McArthur. During the 1892 field season, McArthur spent only 111 days in the mountains. Out of that total, he lost 48 days to smoke, rain, fog and snow. But he was still able to survey an impressive 475 square miles. In the 1894 field season, the weather was much more favourable. "I made 23 ascents and exposed 275 plates," wrote McArthur in his report to Deville. The new methodology was used extensively by the Interprovincial Boundary Survey that mapped the continental divide from 1913 until 1925.

Deville remained as Surveyor General of Canada until his death in 1924.

The mountain was named by and first climbed by W.S. Drewry, a Dominion Land Surveyor and assistant to James McArthur.