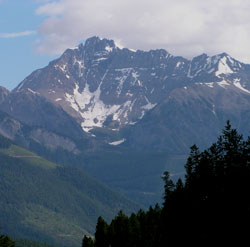 Aime Laussedat was greatly respected by Edward Gaston Deville, Surveyor General of Canada (see Mount Deville) from 1885 until 1924. Laussedat pioneered the use of photography as a surveying tool to map the city of Paris. He used unmanned balloons and kites from which he suspended his camera. Deville later refined and adapted his techniques for use in the mountains of Canada. By comparing the photographs taken from various locations and incorporating standard surveying techniques a third dimension was added to the mapping and this resulted in the first contoured maps that incorporated shading that were produced in North America. The method meant that heavy cameras, tripods, and other equipment had to be carried to the summits and other high points in the survey area. However the new method resulted in a huge increase in the accuracy of the final maps. The Colonel is also named in his honour.