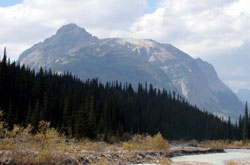 Province: Alberta
Park: Banff
Headwater: Saskatchewan
Visible from Highway: 93N
Year Named: 1918
Named by: Arthur Wheeler
Named for: Thompson, David (David Thompson was one of Canada's most famous explorers. He was the first to cross Howse Pass and Athabasca Pass and, together with Duncan McGillivray, the first to enter the Bow Valley.)

David Thompson explored widely during the late eighteenth and early nineteenth centuries, completing the first map of western Canada in 1826. During his career he travelled some ninety thousand kilometres (55,000 miles) by canoe, horse, and on foot. One of the world's great geographers, he was the first to map the main travel routes in western Canada and the northwestern United States.

In the spring of 1807, as an employee of the North West Company, he paddled up the North Saskatchewan from Rocky Mountain House seeking a passage to the Columbia River and the Pacific. After passing what has become Saskatchewan River Crossing, and travelling six or seven kilometres up the Howse River, it became impossible for the canoes to proceed any farther. According to Thompson's journal, "Here among the stupendous and solitary Wilds covered with eternal Snow, and Mountain connected to Mountain by immense Glaciers...I staid fourteen days more, impatiently waiting the melting of Snows on the Height of Land..." During these fourteen days the party made the necessary preparations to proceed over Howse Pass with horses and on June 22nd he wrote that he had reached a "rill whose current descends to the Pacific Ocean -may God in his mercy give me to see where its waters flow into the ocean, and return in safety."

In 1920, the mountain above David Thompson's 1807 campsite on the Howse River was, most appropriately, officially named Mount David. It is unusual that a mountain should be given the first name of an individual rather than the last. Arthur Wheeler named the peak and was aware that a peak adjacent to the Wapta Icefield to the south had already been given David's surname in 1898 in honour of Charles Thompson.

The Interprovincial Boundary Survey Report reads, "The station was named Mount David with reference to David Thompson of the North West Fur Trading Company, who first traversed Howse Pass in 1807. It stands, a high isolated peak directly opposite the valley of Conway Creek which gives access to Howse Creek summit."

In 2006, in anticipation of the 200th anniversary of Thompson's passage through Howse Pass, efforts were successful to have the mountain renamed Mount David Thompson.

[Additional Information: "On the Road with David Thompson" by Joyce and Peter McCart"]

Photo: Mount David Thompson from the north at Saskatchewan River Crossing on the Icefields Parkway