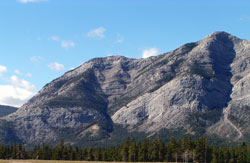 Province: Alberta
Headwater: Bow
Major Valley: Bow
Visible from Highway: 1
Year Named: 1965
Named for: The mountain stands on one side of the entrance to the mountains like a door jamb.

Door Jamb Mountain and Loder Peak are minor highpoints on the long ridge that rises from the Bow Valley to the south of Yamnuska. The highest point of this ridge reaches 2393 metres directly west of Yamnuska.

Door Jamb Mountain shows only a single closed contour on the 1:50,000 topo map and is only 750 metres south of Loder peak.

Loder Peak is likely the high point reached by Duncan McGillivray and David Thompson in the fall of 1800. On November 30, Thompson wrote that they climbed an, "inaccessible steep" ridge to the 7000 foot level. He went on to describe the ascent as follows: "We began to ascend the mountain. We found it very steep with much loose small stones, very sharp, but as we got higher and higher the loose stones became less frequent. Where the rock was sold, it was extremely rough and full of sharp points like an enormous rasp. This enabled us to mount places very steep, as the footing was good and sure, but it cut our shoes, sockes. etc., all to pieces in a thrice." Thompson described the view from the highest point that he reached: "Our view from the height to the westward was vast and unbounded. The eye had not the strength to discriminate its termination. To the westward, hills and rocks rose to our view, covered with snow. Never before did I behold so just, so perfect a resemblance to the waves of the ocean in a wintry storm."