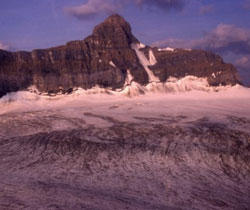 This peak was one of the first to be climbed by Alfred Ostheimer during his 1927 expedition. In "Every Other Day," he wrote of his fascination with the mountains between the Athabasca and Chaba Rivers, singling out Dais Mountain as follows, "Among the mountains between the rivers, Dais is outstanding. It's single turret peak, 10,612 feet high, far surpasses its fellows in form, beauty and elevation. Its western and northern faces are ringed by 2,000 foot clffs; the eastern side is sheer for 1,500 feet; snowfields stretch upon its southwestern slopes."

Ostheimer and Hans Fuhrer completed the first ascent of the peak during poor weather, Ostheimer later writing, "At 6:10 p.m., the rocks flattened slightly and we found ourselves on a knife arete. A narrow, soft cornice led into the mist of the storm. Across this we wriggled, straddling the cornice in a sitting position to keep from being blown away. I was in the tail. Suddenly, the soft nothing under my feet gave way and I headed toward the Athabasca River, but luckily a protruding rock checked me. A second later, Hans started for the Chaba Valley, but the stout mountain rope held us astride the ridge. Such a wild crossing that was! Our eye-lids froze together repeatedly; hands were numb, and our clothes a solid mass. But the ridge was not long and at 6:30 p.m. we were on the summit of Dais Mountain. After a moment's rest, we buried a record can in the cornice and hurriedly doubled backward on our route of ascent."