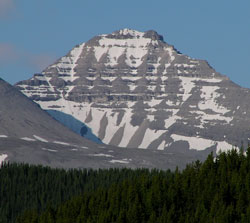 50.3003N -114.781W
Located on the continental divide at the headwaters of headwaters of Henretta Creek; south buttress of Fording Pass

Mount Cornwell and the peaks of Courcelette Peak exhibit distinctive horizontal bedding planes which are often highlighted by snow. Since all of the peaks in this group are considerably higher than others they often have snow cover. The horizontal bedding is highlighted under these conditions. This peak is sometimes confused with Mount Cornwall in the Elbow River headwaters. JOHN CORNWELL VC John Travers "Jack" Cornwell was a sixteen year old member of a gun crew aboard HMS Chester, a Royal Navy cruiser which was severely damaged during the Battle of Jutland in 1916. His teacher described him as "an ordinary English boy" and it is said his days were spent in "rambling over the streets of London" but that his "one great desire was to be a sailor." In October, 1915 he enlisted as "Boy, 2nd Class" in the Royal Navy. He was referred to as, "a good boy, quick and ready, and always spick and span" and for these reasons was selected for the post of messenger to the commander of the naval barracks at which he was learning the elements of seamanship and gunnery. Cornwell was soon promoted to "Boy, 1st Class" and on May 31st, 1916 was aboard the cruiser HMS Chester as as it sailed into the greatest sea battle of the First World War. As part of the crew of the forward six inch gun it was his duty to set the gun to the range telephoned to him from the fire control. In a letter to John Cornwell's mother, Captain Lawson of the Chester described the "Boy Hero of the Battle of Jutland's," actions when he wrote, "The wounds which resulted in his death were received in the first few minutes of the action. He remained steady at his most exposed post at the gun, waiting for orders. All but two of the ten crew were killed or wounded, and he was the only one who was in such an exposed position. But he felt that he might be needed, and indeed he might have been; so he stayed there, standing and waiting, under heavy fire, with just his own brave heart and God's help to support him." Another author wrote that, "After the battle, the ship's crew found him with shards of steel penetrating his chest but still alive, looking at the gun sights and still waiting for orders." Cornwell's ship was honoured by a Canadian Mountain as well. Mount ChesterKananaskis Range and may be seen from the Smith-Dorrien/Spray Trail.