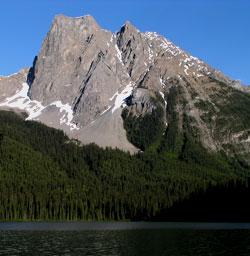 As the backdrop to Emerald Lake and Emerald Lake Lodge in Yoho National Park, Mount Burgess is a well known peak. Beginning in 1954, it became known as "Ten Dollar Mountain" because it was featured on the back of the ten dollar bill. Seventeen years later it was superseded by one of Sarnia's petrochemical plants.

The mountain lies between Emerald Lake and the Kicking Horse Valley. It may be seen from the Trans-Canada Highway in the vicinity of Ottertail Creek but is not a particularly attractive feature from this angle.

Mount Burgess was named in 1886 by Otto Klotz who discovered the fossil beds on Mount Stephen. In 1886 he named the peak in honour of Alexander MacKinnon Burgess (1850-1908). Burgess was Deputy Minister of the Interior and in 1897 became Commissioner of Public Lands for Canada.

In 1996, the north peak of Mount Burgess, the high point on the left side of the peak when viewed from Emerald Lake, was named Walcott Peak after Dr. Charles D. Walcott the geologist who discovered the Burgess Shale Fossils. The name was suggested by geologist Brian Norford, and subsequently endorsed by various geologists and paleontologists in Canada, the United States and the United Kingdom.

Mount Burgess was first ascended by James McArthur in 1892 during his survey of the lands adjacent to the Canadian Pacific Railway.

Photo: Looking northeast to Mount Burgess from the Trans-Canada Highway at the Ottertail River Bridge