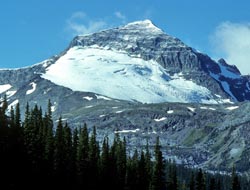 52.3803N -118.229W
Located on the continental divide at the head of East Iroquois Creek; eastern buttress of Athabasca Pass

"Being well rested by one o'clock, I set out with the view of ascending what seemed to be the highest peak on the north," wrote botanist David Douglas during his crossing of Athabasca Pass in 1827. "Its height does not seem to be less than 16,000 or 17,000 feet (5000 metres) above the level of the sea. The view from the summit is of too awful a cast to afford pleasure. Nothing can be seen, in every direction as far as the eye can reach, except mountains towering above each other, rugged beyond description. This peak, the highest yet known in the northern continent of America, I feel a sincere pleasure in naming 'Mount Brown,' in honour of R. Brown, Esq., the illustrious botanist...A little to the southward is one nearly the same height, rising into a sharper point. This I named Mount Hooker..." David Douglas, whose name is associated with the Douglas Fir tree, was Professor Brown's student and his ascent was the second recorded climb of a mountain in the Canadian Rockies (Peter Fidler climbed Thunder Mountain adjacent to the Oldman River Gap in 1792).

When Douglas's book and associated maps recounting his experiences in Canada's mountains were published, Mount Brown and Mount Hooker became well known. J. Monroe Thorington wrote that, "When I was little, when you were a school-child, geography books taught that the highest mountains of North America -Mount Brown and Mount Hooker -lifted their unsurpassed heights on either side of Athabasca Pass. Douglas's determination of their elevations was probably based upon an estimate of the elevation of Athabasca Pass made by an earlier traveller who had lost his barometer and overestimated the altitude by eighteen hundred metres. Adding further to the confusion, it is difficult to understand how Douglas, even with his acknowledged eyesight problems, could have failed to notice that the other mountains nearby were much higher than the one he had climbed.

In the late nineteenth century the first mountaineers to visit the Rockies were very anxious to find and climb these "giants" and their explorations were directed to the area of Athabasca Pass. Arthur Coleman, a geology professor from Toronto, later wrote, "A high mountain is always a seduction but a mountain with a mystery is doubly so...I studied the atlas and saw Mounts Brown and Hooker...(and) I longed to visit them." In 1893, during his third summer of explorations, he finally reached the pass but the highest mountain he could find nearby was only about 2800 metres high. Disappointed he wondered, "What had gone wrong with these two mighty peaks that they should shrink seven thousand feet in altitude and how could anyone, even a botanist like Douglas, make so monumental a blunder?"

But these mythical pair of giant mountains had been talked about for so long and appeared on so many maps, that the legend did not die easily. Even mountaineers experienced in the Rockies such asWalter Wilcox and Norman Collie still believed they may have existed and continued the search.

The search for Douglas's huge peaks was finally brought to a close, not in the mountains of Canada, but in a library in England when Collie carefully read Douglas's original journals and noticed that he had claimed to have climbed Mount Brown in a single afternoon. "If David Douglas climbed a 17,000 foot peak alone on a May afternoon," he wrote, "when the snow must have been pretty deep on the ground, all one can say is that he must have been an uncommonly active person... For nearly seventy years they have been masquerading in every map as the highest peaks in the Canadian Rocky Mountains; they must now retire from that position, and Mts. Forbes, Columbia, Bryce, and Alberta will, in future, reign in their stead."

Photo: A "telephoto shot" looking southwest up the Whirlpool River Valley to Mount Brown from Highway #93, just north of the Athabasca Pass Viewpoint