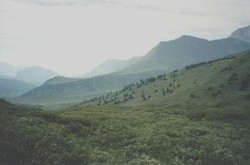 Photo: Looking south from Whiterabbit Pass on a hazy morning

This high pass connects the Clearwater Valley with the North Saskatchewan Valley. The headwaters of Whiterabbit Creek, however, are not reached until one descends the north side of the pass and crosses another very low pass from the Ram River drainage into that of Whiterabbit Creek.

The gentle southern slopes of the pass features a huge area of open meadowland.

Arthur Coleman's party crossed the pass for the first time in 1892 and this was likely the first non-native visit to Whiterabbit Pass. Coleman described the trip, which began after riding up the Clearwater River to what is now known as Indianhead Creek, as follows, "Another long day's journey took us over a higher pass, running through a fine knot of mountains, to the Atikoseepee, only a small creek, where we crossed at its head. With tired ponies after twenty-seven miles of travel we camped in this narrow frigid valley from which the snow had just melted, leaving moist meadows for pasture. We were so close to timber-line that poles for the tent were hard to find, and only gnarled little tree-trunks could be got for the fire so much needed in the nipping air. In the morning we started through the splashy meadows in a flurry of snow, crossed a pass well above the trees (7,500 feet), and entered the valley of White Rabbit Creek..."