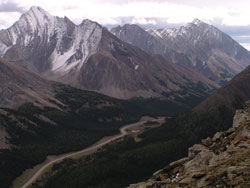 At an elevation of 2206 metres, Highwood Pass is the highest point in Canada which may be reached by paved highway. There are a number of good reasons to pause at the top of the pass, one of which is to enjoy the view to the north that, although somewhat restricted, features the distant peaks of the Kananaskis RangePocaterra Ridge, brilliantly green in early summer and featuring some classic avalanche slopes. George Pocaterra knew this part of Alberta's mountains very well and was a frequent visitor in the first four decades of this century, hunting, guiding, and prospecting.