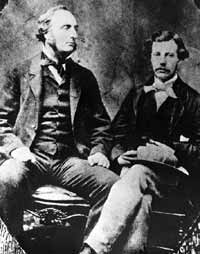 From 1857 to 1860 Captain John Palliser led a group of scientists into what was then the virtually unknown territory lying west of what is now Manitoba. Known as the British North American Exploring Expedition, it was charged by the government of the day with the task of exploring, studying, and mapping the plains between the North Saskatchewan River and the American border, as well as the southern passes through the Rockies.

John Palliser's background was wilderness travel, hunting, and seeking adventure in the western United States. He was delegated to organize and lead the expedition but the real work was to be done by respected British scientists in the area of geology, botany, zoology, climatology, and geography.

Peter Erasmus was a guide with the Palliser Expedition. In his book, "Buffalo Days and Nights," Erasmus wrote, "Captain Palliser was quite tall and always appeared to hold himself erect so that he had a straight-backed military appearancse. He had a pleasant smooth voice and expressed each word with exact and clear pronunciation. He seldom raised his voice higher than ordinary conversational tone but when he spoke his voice carried further than any other speaking at the same time...The character of the man himself and his attitude of friendly equality aroused a loyalty that was greater than mere respect. Every man was stirred to give his best to any tasks assigned to him."

Although it doesn't relate to John Palliser's explorations in the Canadian Rockies, his book, "Solitary Rambles and Adventures of a Hunter in the Prairies" is an interesting account of his travels in the United States in 1847 and 1848. Alone with his trustworthy dog, Ishmah, Palliser wandered for nine months through eastern Montana and western North Dakota. The book was published in 1853 and was reprinted by Hurtig Publishers in 1969.

It is difficult to imagine the expedition approaching the front ranges of the Rockies without any sort of map and with virtually all the features un-named. The vastness of this unknown land and their task must have at times seemed overwhelming and it is not surprising that Palliser chose to split his group into smaller parties upon reaching the mountains. Thomas Blakiston, the expedition's "magnetic observer," travelled south to the vicinity of Waterton Lakes and then crossed the Kootenay and South Kootenay Passes. Palliser himself travelled to the headwaters of the Kananaskis River and down the Palliser River to the Kootenay. James Hector, the expedition's surgeon and geologist, rode up the Bow Valley, over Vermilion and Kicking Horse Passes, and explored the North Saskatchewan Valley, Howse Pass, and the Athabasca River.

The Palliser Expedition produced the first maps of Alberta's mountainous areas and many of the prominent features were named. Generally the names chosen were those of respected fellow scientists such as one member's anatomy professor at the University of Edinburgh, government officials who supported the expedition such as the Governor General of the day, and fellow explorers of the era such as David Livingstone (Mount LivingstoneMolar Mountain or named a mountain after a bird or animal seen nearby.