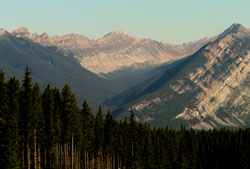 Photo: Mount Kent from the south on Hwy. #40, about one km south of Elpoca Creek bridge

THE BATTLE OF THE FALKLAND ISLANDS

Mount Kent, Mount Cornwall, and Mount Glasgow are three of over a dozen peaks in the Kananaskis area named after British warships of World War I. Most were ships which had participated in the Battle of Jutland in 1916, but HMS Cornwall and HMS Glasgow were both cruisers which played a significant role in the 1914 Battle of the Falkland Islands.

German naval forces had been raiding commercial shipping in the south Atlantic and a much larger Royal Navy formation was dispatched to the area. The battle, although not a complete victory, freed Britain's trade and troop transport routes in that part of the world from the threat of surface raiders for the duration of the war.

The Cornwall and Glasgow, together with HMS Kent, were pursuing three German warships that were trying to escape the main battle and seek refuge in Tierra del Fuego. Choosing to concentrate their attention on the German light cruiser Leipzig, HMS Glasgow engaged first, attempting to slow down the fleeing German ship and allow the Cornwall to catch up and assist. The Glasgow suffered some hits but the tactic was successful and soon HMS Cornwall came into range and, as her captain wrote, "Cornwall hit the Lepzig's foretopmast and carried it away, turned to starboard, and I poured in my whole broadside." The two English ships then engaged their wounded quarry from opposite sides, their fire becoming more and more effective as they slowly closed the range. Out of ammunition, the Leipzig fired its last two torpedoes but the British had by then retreated out of range. They then re-approached the Leipzig to see if the Germans had "struck her colours," but since her ensign was still flying, opened fire once more. Her flag still flying, the Leipzig heeled over to sink rapidly by her bows. The British ships could rescue only 18 of the 286 sailors and Captain Ellerton of HMS Cornwall, "regretted that an officer as gallant as Captain Haun of the Leipzig was not one of them."