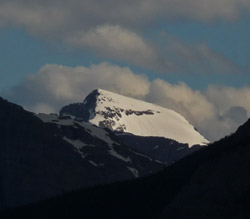 50.5281N -115.207W
Located on the continental divide at the head of Petain and Mangin Glaciers; northeast buttress of Sylvan Pass

Mountain enthusiasts should be sure to stop on Highway #40, two kilometre north of the junction with the Kananaskis Lakes Trail for a distant view of Mount Joffre. The mountain is only visible for a very limited distance between the slopes of Mount Sarrail on the left and Mount Indefatigable on the right. Rising majestically some twenty-four kilometres away, Mount Joffre's height and significance are most apparent. At 3450 metres, it is the highest mountains between Mount Assiniboine and the U.S. border and its northern slopes are draped with the Mangin Glacier, the southernmost significant accumulation of ice in the Rockies. In Volume I of the Interprovincial Boundary Survey, Arthur O. Wheeler wrote, "Mount Joffre is the supreme massif of the region: it rises to an elevation of 11,316 feet above sea-level and has been so named by the Commission in honour of the great Field Marshal of France. Seen from the north and west it appears an isolated snow-peak and is surrounded on three sides, north, east, and southeast by icefields and glaciers: towards the west it presents towering rock precipices. It dominates the wild, glacial amphitheatre to the east of it in which the Elk River has its farthest source and the outflow from the many glaciers surrounding the amphitheatre furnish the waters of that stream." General Marshall Joseph Joffre was credited with the French victory at the Battle of the Marne which halted the German advances at the beginning of the First World War. He was later made Commander-in-Chief of the French Army. Evidence of the mountains significance is the fact that J.W.A. Hickson, a well-known early climber in the Canadian Rockies and guide Edward Feuz jr. journeyed this far south to complete the first ascent in 1919.

Looking south-southwest to Mount Joffre beyond Mount Sarrail (left) from Highway #40, just north of the junction with Kananaskis Lakes Trail