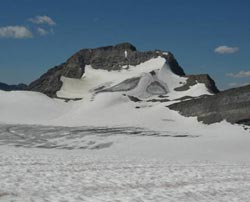 JOSEPH WILLIAM ANDREW HICKSON (1873-1956) J.W.A. Hickson made some thirty first ascents with Edward Feuz jr. over a period of twenty-five years. The two climbed together often, Edward Feuz jr. estimating that they climbed between two and three hundred mountains together, twenty-five of them first ascents. Feuz had great respect for his favourite client saying, "If you ever saw him walk down the street, you'd never think he was a mountaineer. He could hardly walk. Years ago a horse he was riding slipped and rolled over his leg and it never healed well. Physically, he was not strong either. But he had an iron will, and he was the most stubborn man I ever met; after all that's what gets you up mountains." A professor of philosophy and psychology at McGill University in Montreal, Dr. Hickson served as president of the Alpine Club of Canada.

Photo: Looking south-southeast up the Valley of the Hidden Lakes to Hickson Peak from the Red Deer Valley

Photo: Looking south-southeast up the Valley of the Hidden Lakes to Bonnett Peak (left) and Hickson Peak from the Red Deer Valley