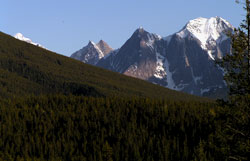 Photo: Looking south to the summit of Hanbury Peak (left) and Allan Peak (right) from the southern end of the Emerald Lake Road

51.2444N -116.457W
Located at the Ottertail River Valley at the head of Silverslope Creek; head of the Ice River Valley north of Martins Creek

According to the American Alpine Journal (Volume 4; Page 315) Edward Whymper met Charlotte Hanbury in 1889 but they had corresponded for many years, the lady having visited Chamonix as early as 1856 and made minor ascents. Although she was ten years older than Whymper he was attracted by her charm and energy, and gave her family name to the peak above the Ice River when he was there in 1901. The above disagrees with Boles et al (Place Names of the Canadian Alps) who state that the peak was named by Edward Whymper to honour the Canadian explorer David Hanbury.