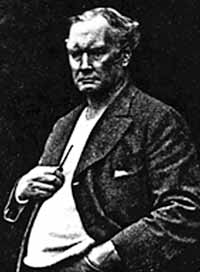 "Every night, do you understand, I see my comrades of the Matterhorn slipping on their backs, their arms outstretched, one after the other, in perfect order at equal distances -Croz the guide, first, then Hadow, then Hudson, and lastly Douglas. Yes, I shall always see themƒ" -Edward Whymper

Edward Whymper's interest in mountains developed from his trade as an artist and engraver through which he was exposed to the Alps and even completed an engraving of some peaks west of Priddis, Alberta. He became the most renowned climber in the world after completing the first ascent of the Matterhorn in 1865. This most significant accomplishment came after a number of other impressive ascents in the Alps but the tragedy during the descent haunted him for the rest of his life and likely was responsible for his extensive use of alcohol.

Edward Whymper first visited the Canadian Rockies in 1900, making a transcontinental trip at the invitation of the CPR. During the following winter Whymper suggested to the CPR that they invite him to spend a summer in the Rockies. He had a plan for a series of climbs and in return he would promote the Canadian Rockies and the railway in his written reports and speaking engagements in England and Europe. In return the CPR would provide free transportaion for himself and his four Swiss guides. The railway officials thought this was a good idea and even arranged to have an unclimbed peak named in his honour prior to the trip (see Mount WhymperChristian Kaufmann. Other climbers such as Norman Collie and James Outram were openly hostile and concerned that, despite the fact that he was over sixty years old, he would claim many of the remaining un-climbed peaks including the "Canadian Matterhorn," Mount Assiniboine. But it soon became apparent that Whymper, largely because of his alcoholism, was somewhat limited in what he could accomplish.

He journeyed to the Rockies every summer from 1901 until 1905 and returned for a final visit in 1909. He explored and climbed in the Vermilion Pass area, and spent considerable time in Yoho National Park. But he climbed few peaks and the ones he chose were not as challenging as expected. Sadly his personality, probably due to the Matterhorn experience and his alcoholism, was such that he anatagonized those he worked with, particularly his guides and outfitters. Practical jokes were played including placing a chipmunk in a tin can under his bed and setting up staged photographs of his empty liquor bottles.

One of those who apparently had a "personality conflict" with Edward Whymper was the legendary guide Bill Peyto. After arriving in Canada from England in 1886, Peyto worked for the CPR, homesteaded, and prospected before entering the outfitting business with Tom Wilson. When he was chosen to lead Whymper to Vermilion Pass he had acquired a solid reputation for his work with Walter Wilcox, Norman Collie, and others.

Bill and Mr. Whymper seemed to get along reasonably well during their initial trip together and although he found numerous faults with his Swiss guides, he felt that Peyto had, "properly executed his commission." Later in the summer however, after a severe tongue-lashing from Whymper for coming back to camp to early from trail clearing work in the Yoho Valley, Bill walked out on him with the excuse that he had to take two sick horses back to Field.

Whymper visited the Crowsnest Pass area in 1903 and again in 1904 as part of his efforts to travel in the Canadian Rockies on behalf of the CPR and then to write promotional articles for newspapers and popular journals. Specifically, while in the Crowsnest Pass area, he was to identify suitable locations for the construction of hotels and chalets and also to examine Turtle Mountain that in April of 1903 had been the scene of a tragic slide. It was hoped that Whymper could determine the possibility of future slides.

In 1904 Whymper made arrangements with Tom Wilson, the first white man to see Lake Louise, and two Swiss guides (Christian Hasler jr. and Friedrich Michel) and they travelled to the vicinity of the unclimbed peak which Whymper "had been given to understand was impossible of ascent."

On July 26th, Wilson, Hasler, and Michel made their way to the west side of Crowsnest Mountain where they established a camp. They were to cut a trail around the mountain, examine its features, and then report to Whymper. It appears that Mr. Whymper's "employees" could not resist the temptation to climb the peak and when Whymper arrived on July 29 a telegram from Wilson was waiting that read, "Flag on Crows Nest Mountain. Waiting orders." The mountain had been climbed on July 28th. This may have been one of a number of tricks played on Edward Whymper by a few of the guides and outfitters he engaged.

It was expected, by the CPR and others, that Whymper would eventually write a book about his experiences in the Canadian Rockies which would promote them in climbing circles across Europe but presumably he lacked the energy and enthusiasm to complete the project.

[Additional information: "Edward Whymper" by Robert E. Campbell; one of the "Tales of the Canadian Rockies" edited by Brian Patton

[Additional information: "The CPR and the Promotion of Tourism in Western Canada: Edward Whymper in the Crowsnest Pass" by Raymond J.A. Huel; University of Lethbridge; Prairie Forum, Spring 1986]