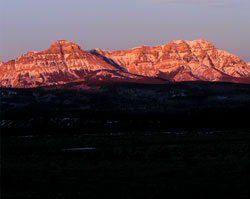 To the north of Mount John Laurie lies a small, two mountain range located five km east of the main front range between the headwaters of Old Fort Creek and the South Ghost River. Association Peak is the southernmost and lower of the two, an attractive, symmetric peak which is quite noticeable from the Trans-Canada Highway but best viewed from Highway #1A. Although the name was officially approved in 1967, it had been well established long before that. The reason for its name and the association that is honoured are not known.

Association Peak (left) and End Mountain from Highway #1A