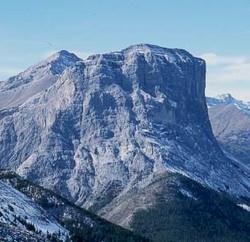 Range: Highwood
Province: Alberta
Park: Kananaskis
Headwater: Bow
Major Valley: Sheep
Visible from Highway: 546
Year Named: 1928
Named for: The peak was thought to resemble the Rock of Gibraltar at the entrance to the Mediterranean Sea.

When this peak is viewed from the Bluerock Recreation Area, its similarity to the famous "Rock of Gibraltar" at the entrance to the Mediterranean Sea is striking. The 700 metre, near vertical, and in some places overhanging cliffs of the north face are most impressive. The slopes below these cliffs receive very little direct sunlight and are completely covered with a healthy accumulation of moss. In the summer of 1918 the mountain was the scene of a tragic accident. Three young men who were working at Pat Burns's coal mine in the valley below climbed to the top of the mountain which at that time was know locally as "Sheer Cliff." One of them, a visitor from the west coast named Patterson, was approaching the cliff edge when a gust of wind forced him over the precipice. The body was never found. Over four decades later a trunk containing his personal belongings was discovered in a corner of one of the old mining town's buildings when it was about to be burned down. While there are easy ways to get to the summit of Gibraltar Mountain, the north face is a real mountaineering challenge. It was first climbed in 1971 by Bill Davidson and Jim White who took eight and one-half days to complete what was the first "extended aid" climb in the Canadian Rockies. Note that Gibraltar Rock is located in the Bryant Creek Valley near Assiniboine Pass.

Looking west to Gibraltar Mountain from the Sheep River Valley