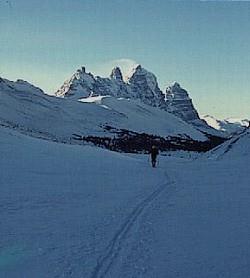 In his book, "The Glittering Mountains of Canada," J. Monroe Thorington described Mount Geikie from above Icefall Lake as, "a tremendous grim wall it is, seared and fissured by ice-filled couloirs, and surmounted by two fine towers sprinkled with new snow."

Mountain enthusiasts will enjoy watching Mount Geikie and Barbican PeakMount Rockingham. Mount Geikie is an impressive 750 metres (2500 feet) higher with steep cliffs on both sides. For the next 25 km or so as one approaches Mount Rockingham, the distant peaks appear to slowly descend behind the nearer mountain.

James Geikie (1839-1914) was a Scottish geologist noted for his contribution to mapping the geology of Scotland. Geikie joined the Geological Survey under the supervision of his brother, and was charged with mapping glacial deposits in the Scottish landscape. While investigating this, he believed he had found evidence of warmer periods punctuating the ice ages. Having little conclusive evidence, he hesitated at first, but growing evidence from studies of the continental Europe convinced him he was right. His view is still accepted today. He wrote the standard work of the day on the glacial period and succeeded his brother Archibald as Professor of Geology at the University of Edinburgh, a post which he held until 1914.

Photo: Mount Geikie (left) and Barbican Peak tower in the distance beyond Mount Rockingham from the west end of Moose Lake on Highway #16