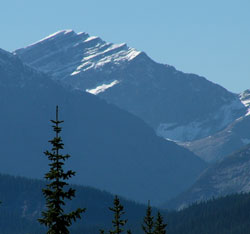 Photo: Looking southwest to Mount Currie from the Smith-Dorrien Road

During World War I, Gen. Sir Arthur Currie became first Canadian commander of the Canadian Corps and later the Canadian Army. Throughout his coommand, Currie remained successfully argued for the retention of the Canadians as a single coherent fighting force.The victory at Vimy Ridge was largely a result of his insistence on meticulous planning and thorough removal of barbed wire obstacles. Currie is said to have been a capable commander who enjoyed a consistently successful run of victories throughout the war. He was one of the few World War I generals who were determined to keep casualty rates as low as possible.

Convinced in the importance of artillery in modern trench warfare, Currie utilised it with impressive success. He was highly thought of by Sir Douglas Haig, the BEF Commander in Chief, however he suffered from a reputation as a foul-mouthed, overbearing officer. He acquired a reputation for managing his troops from far behind the front line that alienated his own troops, although in fact he was a frequent visitor to the front line. Currie was among the most successful generals of the war. He is still considered one of the finest commanders in Canadian military history, having learned from the earlier battles such as the Somme where 420,000 casualties were taken to advance twelve kilometres.

Nathan M. Greenfield, author of "Baptism by Fire: the Canadians at 2nd Ypres, April 1915" wrote of Currie, "Currie was one of the great learners among great men. He studied, he interviewed, he listened and he synthesized ideas developed by his allies and his subordinates. He firmly believed in the Allied cause and Canada's place in it. He also believed that if you were going to take losses, then those losses had to be minimized and the terrain be militarily worth it."

His efforts were criticized in parliament by Sir Sam Hughes and this resulted in postwar controversy and a libel action in 1928 which completely vindicated Currie. On Nov. 5, 2006 Governor-general Michaelle Jean unveiled a collection of life-sized busts and statues that will comprise the Valiants Memorial next to Parliament Hill. A statue of Arthur Currie is included in the Memorial.

The following is Sir Arthur Currie's Appeal to the Canadian Corps prior to the Lys Offensive, April, 1918

"Looking back with pride on the unbroken record of your glorious achievements, asking you to realize that today the fate of the British Empire hangs in the balance, I place my trust in the Canadian Corps, knowing that where Canadians are engaged there can be no giving way.

Under the orders of your devoted officers in the coming battle you will advance or fall where you stand facing the enemy.

To those who fall I say, "You will not die, but step into immortality. Your mothers will not lament your fate, but will have been proud to have borne such sons. Your names will be revered for ever and ever by your grateful country, and God will take you unto Himself."

Canadians, in this fateful hour I command you and I trust you to fight as you have ever fought, with all your strength, with all your determination, with all your tranquil courage. On many a hard-fought field of battle you have overcome this enemy. With God's help you shall achieve victory once more."