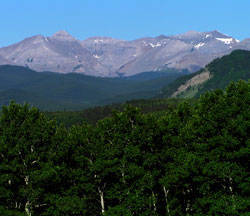 Photo: Mount Burns from the east on Highway #546

Mount Burns is not particularly high but it sprawls over a large area. It is a complex mountain with several peaks. Pat Burns is best known as one of the "Big Four" who organized the first Calgary Stampede in 1912. Together with A.E. Cross, A.J. McLean, and George Lane, $100 000 worth of financing was arranged and the event was billed as, "The Greatest Outdoor Show on Earth." Burns was also very successful as a pioneer of both the ranching and meat packing industries, creating one of the world's largest integrated meatpacking operations of his time worth $15 million in 1928. He was referred to as the "Cattle King of the West." Pat Burns was a generous man, being among the first to rush emergency supplies to the victims of the Frank Slide and leaving an estate that gave the Government of Alberta enough money to cover all the revenue lost by eliminating a two percent provincial sales tax. However the valley below the mountain that bears his name was the scene of one of his less successful business ventures. Around the turn of the century, Julius Rickert discovered coal in the Sheep River Valley to the south of what was to become Mount Burns. Rickert was able to interest Pat Burns in the project and with the influx of one million dollars in capital, "P. Burns Coal Mines Limited" began operation in 1913. Although some coal was trucked out of the valley, most was stockpiled waiting for the arrival of the "Calgary and Southern Railway." During the clearing of the right of way for the planned railway, the great fire of 1919 was started and, fanned by west winds, burned great tracts of land in the mountains and foothills. Pat Burns made many trips though the foothills to his mine when the means of travel was by horseback. His employees wondered, at times, why he went so often. In his book, "Pat Burns, Cattle King," Grant McEwan suggests that, "there was a subtle reason, simply his love for the foothills, and in making a pack trip to Upper Sheep Creek he was finding the best possible release from business pressures and catching the summer and autumn glories of the back country." During the 1920's the demand for coal declined and the project shut down, leaving Pat Burns to concentrate on his other interests. The small town that had developed below Mount Burns was abandoned and the mine entrance sealed but some of the stockpiled coal remains.