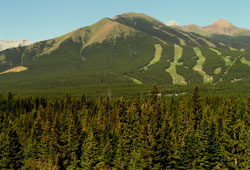 Province: Alberta
Park: Kananaskis
Headwater: Bow
Major Valley: Kananaskis
Visible from Highway: 1, 40S
Year Named: 1948
Named by: M.B.B. Crockford (a geologist who, in 1947, mapped the coal seam which was mined on Mt. Allan)
Named for: Allan, Dr. J.A (A Professor of Geology an the University of Alberta, Dr. Allan was responsible for locating much of the coal reserves in the province.) .

In 1912 Dr. J.A. Allan became the first professor of geology at the University of Alberta. He was responsible for locating much of the coal reserves in the province and a coal mine operated on the slopes of the mountain named in his honour from 1947 until 1952. The Kananaskis Exploration and Development Company mine began initially as a strip mine but later developed into an underground operation complete with a railway and cars. In 1948 the miners' families came to join the workers and a number of tarpaper shacks and log cabins were built below the mine on the north bank of Ribbon Creek. As the village grew to a population of almost two hundred people, it was given the name Kovach after Joe Kovach, the district forest ranger. Slumping coal markets forced the closure of the mine and today only some crumbling stone work and foundations remain in the forest which has overgrown the old townsite. One the slopes of Mount Allan, the mine scar appears as a lush meadow following reclamation of the site. According to the British Columbian Geographical Names website, Allan Peak in Yoho National Park is also named in honour of Dr. Allan. However, "Place Names of the Canadian Alps" by Putnam, Boles, and Laurilla disagrees. In 1966, the Rocky Mountain Ramblers hiking club decided to mark Canada's centennial by building a trail that traversed Mount Allan climbing from the Kananaskis Valley along the long southeast ridge, crossing the summit, and descending the equally long north ridge to the Bow Valley near Deadman's Flat. It took three summers to complete the project. Gillean Daffern, author of the "Kananaskis Country Trail Guide," refers to the trip as, "one of the most wonderful ridge walks in the Canadian Rockies." The Nakiska ski area at which the 1988 Olympic alpine skiing events were held is situated on the eastern slopes of Mount Allan. *A hiking route to the summit is described in Gillean Daffern's Kananaskis Country Trail Guide. For a panoramic view from the summit of Mount Allan visit www.canadasmountains.com.

Photo: Looking west-southwest to Mount Allan from Highway #1A